How to handle racism in the world of larpers

Please note: This blogpost is written from a Swedish point of view and consists of my personal opinions.
This post is going to focus on how you as an individual (not an organizer) can work against racism and nazism that is affecting larpers of colors. 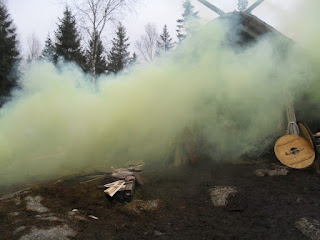 During my years as a larper, I have gone from larping four times a year to  once or twice a year. This is mostly due to the fact that I work every summer but also since I have so much else going on in my life, like working with Sverok, friends and more work.But nevertheless, I try to go to at least one larp every year.
I have to be honest, since I started larping in 2003  I have encountered very few racist on the larps that I've attended. On the other hand, the Swedish larp scene have had it's fair share of racist prejudices and ignorance when it comes to the question of how to include larpers of colors and every year there is one or more event that I would never, under any circumstances, attend since people that endanger my safety are allowed to participate.
And there has also been a lot of cultural appropriation and racist stereotypes during the years, mostly when it comes to creating new larps.
The biggest issue that shows up in the discussion regarding larp och racism is the fact that people argue that we, as a community, must let racists and nazis be a part of the swedish larp community.
This argument, that is based on the principle that “Everyone must be allowed to be a part of the game”, is so tiring and it doesn't create a good base for a work against racism.
But this discussion exist and it constantly resurfaces in the swedish larp community.

I think the reasons for this are the following:


This in combination with the fact that the larp community in Sweden is so white and the lack of impact analysis results in a debate where the focus has been moved from how racism is wrong to why is it wrong to be a racist.
In the end, this leads to a situation where Larpers of color don´t want to participate in larps.And that makes the larp community in Sweden even more white.
You have to remember this:
When we let racists and nazists participate at larps without questioning them, their participation is at the cost of the safety for larpers of colors. Larpers of colors can not feel safe at larps where racisist and nazists are free to participate. On top of that, most events doesn´t have a plan how to handle the fact that larpers of colors can feel scared and threatened.

So, how can you as an individual in the larp community work against racism?

Sometimes I get the question: But Anna, Are we not even allowed to talk some with the racists and nazis that want to larp?
My answer:
Oh yes, you as a white person is more than welcome to try and talk some reason with racists and nazis and also to try to analyze how they think.But never try to tell me, a person of color, that talking to racists and nazis is my job.
It will never ever be an alternative for me to listen to a racist or a nazi about how they view me a lesser human being or how much they want me dead.No fucking way.
Never try to convince me that it's not a threat to my safety to invite your racist pal that celebrates the Holocaust on their facebook wall to a larp. (This is a real example from the a swedish larp group on facebook a couple of years ago.)
And this goes for everyone, to whom racists and nazis is a real threat. Like people with different religion, or skin color and people in the HBTQ+ community.
We should not have to listen to stupid arguments that WE are the ones that should respect the freedom of speech and listen to what racists and nazis have to say about us.
It isn't reasonable that we should put our safety and well being in harms way for the sake of white larpers inability to take a stand.
I firmly belive that the swedish larp community is capable of so much more and that it can evolve into a great place that is safe and free from racism.
It´s not a human right to participate in every larp but it is your responsibility to work against racism and above all, it is the responsibility of white larpers to make sure that larp is a safe place for larpers of colors.
Thanks to Tjarls Metzmaa for helping me with the translation.